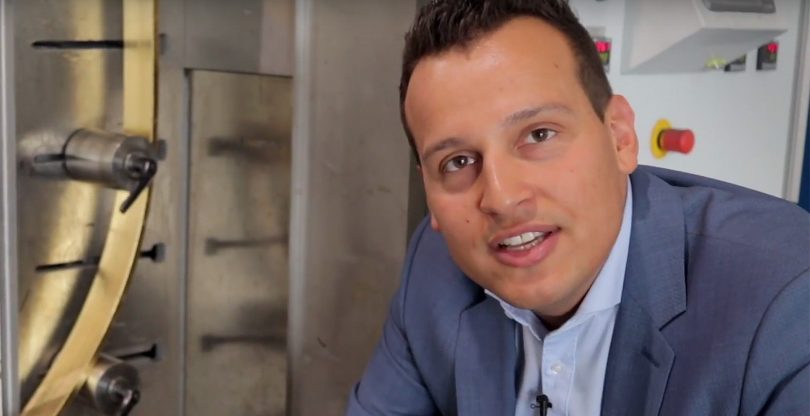 Mint factories are normally shielded as strictly as  high security jails. Film and photo recordings are strictly forbidden, employees are checked on a daily basis before entering the sacred halls. But the interest in the production of a coin is great – many collectors and investors would like to see with their own eyes, how their golden treasures are created.

A German precious metal trader now offers a rare insight into the birth of a coin: Dominik Kettner from the precious metals retailer “Kettner Edelmetalle” has produced a remarkable report for his YouTube channel, for which he reports from a mint facility near Leipzig, where the seven-part gold coin series “African Safari” is produced with a mini-edition of only 50 pieces. The coins are from the African Republic of Chad. On the first edition of the series you can see a magnificent representation of a lion.

In the video Dominik Kettner accompanies the individual steps of production. It is apparent that this report is also very special for the experienced precious metal trader. Kettner explains  all the steps in detail with great enthusiasm and in an easy to understand way: First a gold string is drawn for the later production of the coin. In the upper part of the machine, you can see a gold container with 21 kilograms of gold granules – small globules which are processed into a long strand. The gold strand moves slowly downwards, it is 15 millimeters thick. It takes 20 minutes for the string to reach the correct length. The temperature is 1250 degrees. Two massive pressure rollers pull the strand slowly downwards. At the end, the strand has a length of 1.5 meters and a material value of about 775,000 euros.

After the high temperature the strand has to cool down, it is then rolled several times with a weight of one ton. The strand must be rolled a total of eight times to be compressed from a thickness of 12 to 4 millimeters. The material has a smoother effect during every pressing process, and it shines more and more. After that, the gold string is divided into 1 meter long pieces, it now has a thickness of 2.88 milimeters. The strands are brought to the punching machine, where the individual blanks are formed. The discs with a weight of 5 ounces have a diameter of 60 millimeters. The blanks are punched in a massive machine, next to which even the 1.80 meter tall Dominik Kettner seems small. For punching, precision work is required, the string must not be too thick and not too thin.

After punching, the individual blanks are placed on the balance. The scale is so sensitive that every breath would change the result. With a hiss, the round comes out of the machine. The finished round blanks come into an annealing furnace with a heat of 700 degrees. After half an hour, the blanks are washed. In the modern gold washing machine you can see are fine balls, in which the blanks are bathed for two hours. This makes the blanks even more filigree.

Now the blanks are ready for the actual minting process. The die is inserted into the minting machine, the blanks are cleaned one last time and also inserted, the die is cleaned and positioned. Each coin is minted three times so that the details and highlights are clearly displayed. Lastly, each coin receives a serial number using a diamond engraving. This technique is used so that no material is lost, instead the material is only displaced at the place of the engraving. Then the coin is finished and packed into a capsule and a noble wooden box with serial number and certificate is placed.

You can watch the 14 minute documentation here:
https://www.youtube.com/watch?v=Y2lpxKlCxpU&t=629s