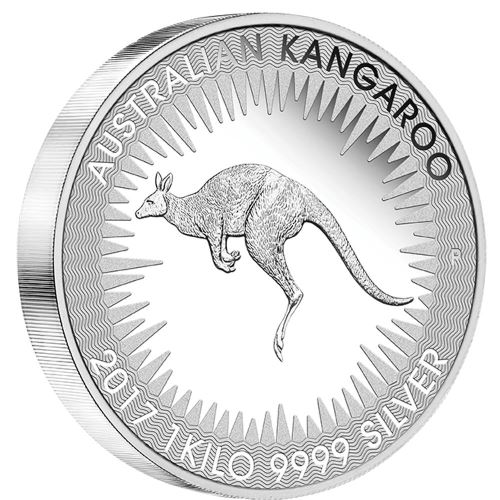 The kangaroo is increasingly becoming Australia’s new bullion ambassador. In addition to the standard version for investment, the Perth Mint has offered its “Australian Kangaroo” as a proof variant for the first time in 2016 – and now the mint continueswith a magnificent XXL coin: The silver kangaroo is available for the first time in 2017 in proof quality. With an edition of only 300 pieces, the coin is likely to become a modern rarity.The coinage will be available from 6 June 2017 at the Perth Mint.

The trend is clearly towards XXL silver: the Perth Mint for the first time increases its popular kangaroo motif and adds it to a collector’s coin, which is also interesting for investors.This investment kilo coin stands out due to its particularly low edition from comparable pieces , which are usually issued in five-digit dimensions.With its product expansion, the Perth Mint competes mainly with the Silver Maple Leaf, which has recently been launched as a 10-ounce variant on the market.

The kangaroo from Australia is best known from the gold kangaroo nugget coins in the bullion area.The “Australian Kangaroo” has been available since 2016 with a fineness of 99.99 per cent (“four nine five”) silver and is the first mass product in silver from the Perth Mint.For collectors, the product range was expanded in 2016 with a mini coin to a quarter ounce of silver as well as a three-coin set in proof quality.The design of the collector’s coins has been minimized in comparison to the bullion coin, the edge rays do not extend to the center of the coins, but allow an unobstructed view of the kangaroo and the reflecting surface of the coin.